How 10 Countries Besides The U.S. Celebrate Thanksgiving??

Traditions may be different, but u can still find Thanksgiving in cultures of the world.

Thanksgiving is a federal holiday in the United States, which celebrated on the fourth Thursday of November, it originated as a harvest festival. The holiday continues to be a day for Americans to gather for a day of feasting, football and family.

But Thanksgiving doesn't always mean turkey, pilgrims, and seemingly endless football! The idea of bursting cornucopias and celebrating the bounty of Mother Nature transcends borders and cultures across the world. Although they spring from the same ideas, thanksgiving traditions around the world bring unique ceremonies and stories that inspired the merrymaking to the table.

It turns out, America isn't the only country dedicated to celebrate Thanksgiving. Here are some thanksgiving and harvest festivals around the world each complete with their own way of showing and giving their thanks!  They might not call it Thanksgiving, their meanings, dates, traditions and customs may vary, but they all revolve around the concept of gratitude.

It may surprise you to learn that Canada's first Thanksgiving celebration actually predates America's—by more than 40 years. In 1578, an expedition led by the English navigator Martin Frobisher held a ceremony in what is now Nunavut, giving thanks for the safety of their fleet. This is considered the first-ever Thanksgiving celebration in North America, though in fact the indigenous peoples of Canada and Native Americans had been holding harvest festivals long before Europeans arrived. Loyalists who moved to Canada during the Revolutionary War introduced turkey, along with some other customs from the American Thanksgiving. 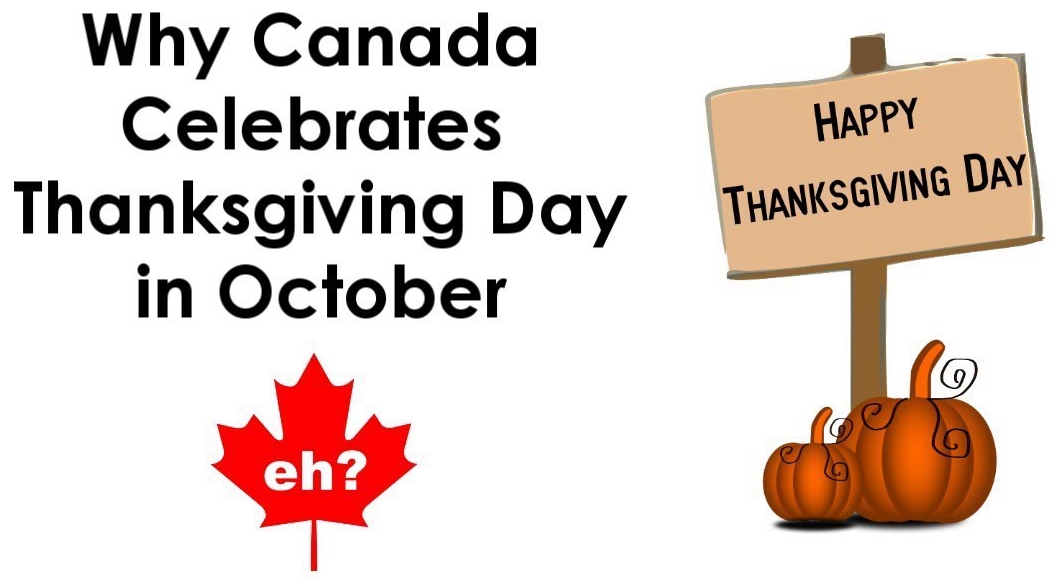 Canada's Parliament formally established a national Thanksgiving Day (Nov. 6) in 1879; as of 1957, the date was changed to the second Monday in October. Thanksgiving traditions in Canada look very similar to American ones, including eating turkey and watching football with family.

Every October 25, people on this West Indian island celebrate their own Thanksgiving Day, which marks the anniversary of a joint Caribbean and U.S. military invasion of Grenada in 1983. The troops' arrival restored order after an army coup ousted and executed Maurice Bishop, Grenada's socialist leader, and put the island under martial law. While stationed on the West Indian island that fall, U.S. soldiers told local citizens about the upcoming American holiday and some of its traditions. 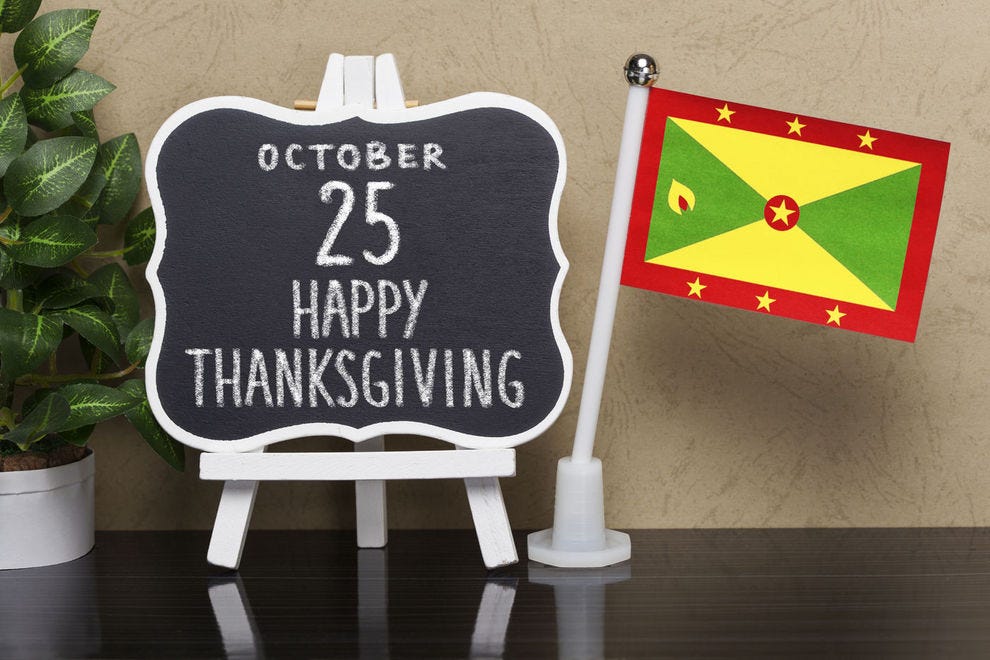 To show their own gratitude, many people in towns and villages hosting the soldiers invited them to dine and celebrate with them, even surprising them with such non-native island foods as turkey, cranberry and potatoes. Today, the Grenadian Thanksgiving features formal ceremonies of remembrance in the cities, but largely goes unmarked in more rural areas.

The German equivalent of Thanksgiving is Erntedankfest ("harvest festival of thanks"), it's a religiously dominated celebration where the churches run the show! Both Catholics and Protestants celebrate and attend church services during this thanksgiving celebration, which falls on the first Sunday in October. Like most thanksgiving traditions, Erntedankfest is centered on giving thanks for the year’s harvest and grain. In one of the multiple church services throughout the day, giant woven baskets filled with fruits, grains, and vegetables are carried to the church, blessed, and then distributed to the poor. 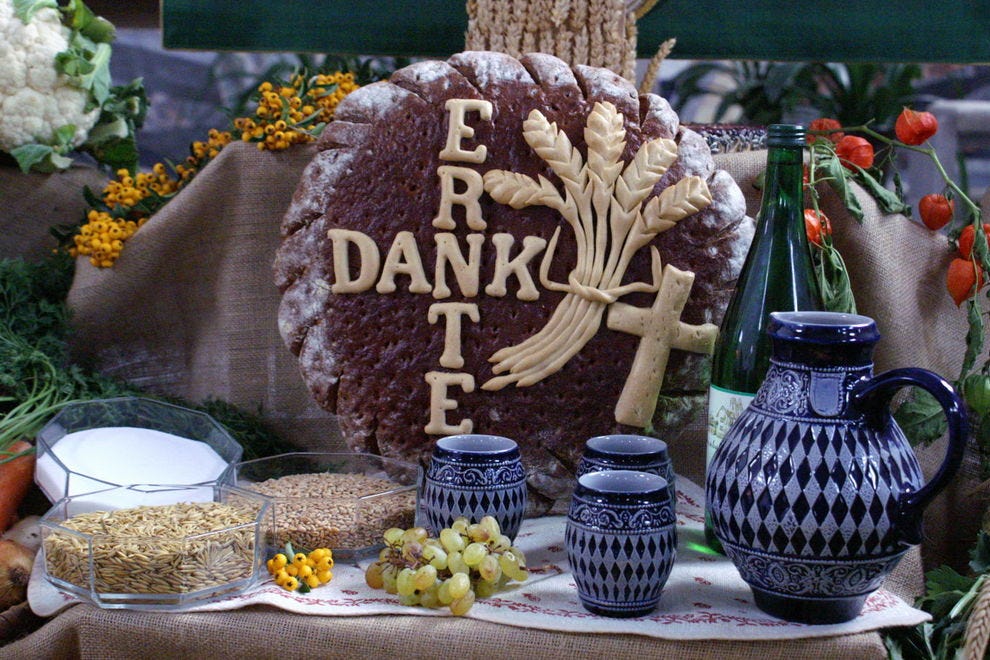 Unlike an American Thanksgiving where they stay at home with close friends and family, German communities take their festivities to the streets and to town squares for parades, music, dancing and, of course, food.  Because turkey, a bird native to North America, is not as common in Germany, an Erntedankfest meal would have chicken or a goose.

Kinrō Kansha no Hi is a national public holiday that Japan celebrates every November 23. Derived from ancient harvest festival rituals named Niinamesai, its modern meaning is more tied to a celebration of hard work and community involvement, hence its translation: Labor Thanksgiving Day. While Niinamesai's traditions reach back thousands of years, Kinrō Kansha no Hi was created officially in 1948. It was intended to celebrate the rights of workers in post-World War II Japan. Today it's celebrated with labor organization-led festivities, and children creating crafts and gifts for local police officers. 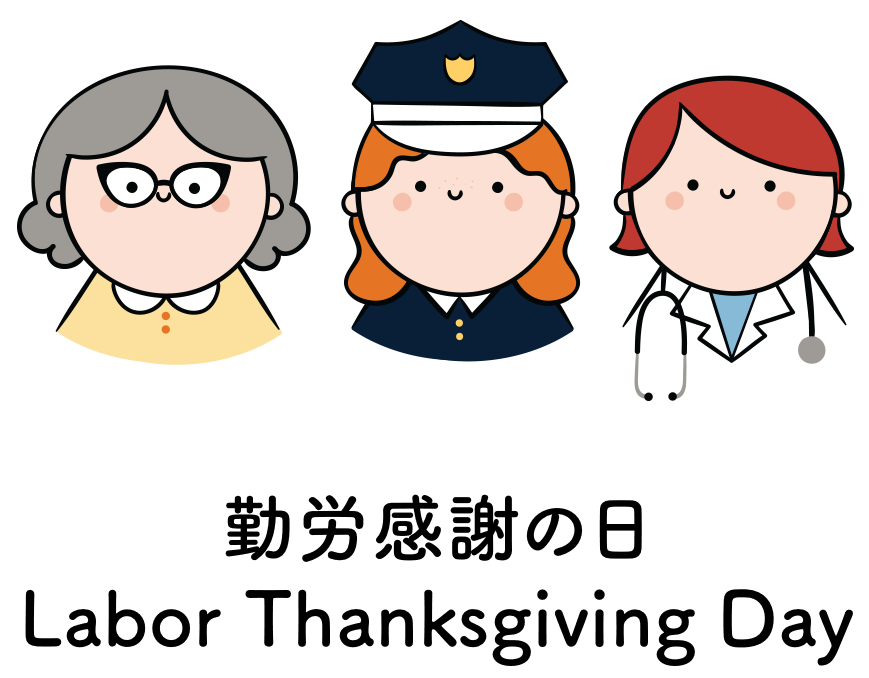 The Korean Thanksgiving equivalent, called Chuseok, which translates as "autumn eve", is celebrated for three days on or near the autumn equinox – whenever the harvest moon appears each year – a tradition that has been alive in the region for millennia. One of the major Korean holidays, it is a time of gathering with family and, as in America, feasting until you can feast no more. Traditional Chuseok foods include rice balls flavored with sesame seeds and pine needles and Korean "pancakes", all washed down with a bit of rice liquor. 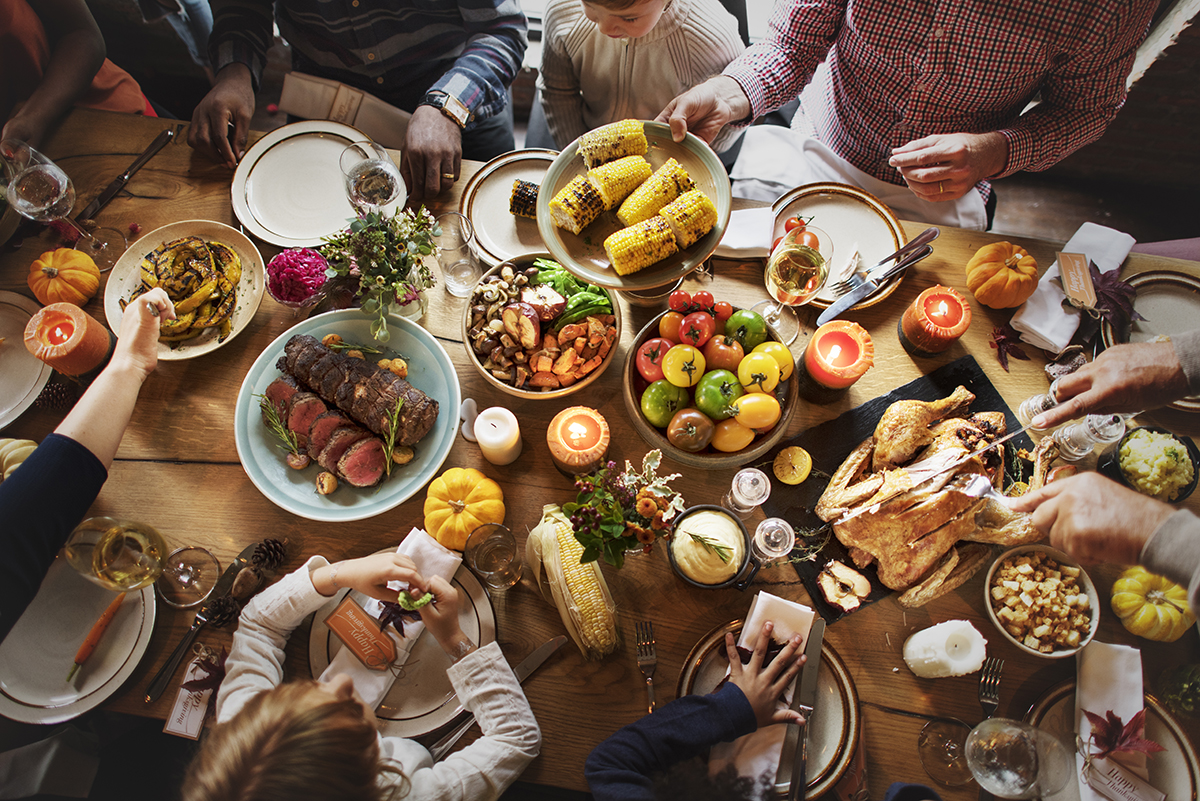 Malaysians believe that "without rice there is no life". The Kadazan Festival, celebrated in May, worships rice as an extension of the Creator, and thus, the source of thriving life and existence on Earth. Malaysians celebrate the Creator, Bambaazon, for his generosity in facilitating life on Earth. In the time of creation, the story states that their God sacrificed his daughter in order to save the people who would otherwise suffer from great famine. He buried parts of her across the land, and her body became the seed of the rice paddy. 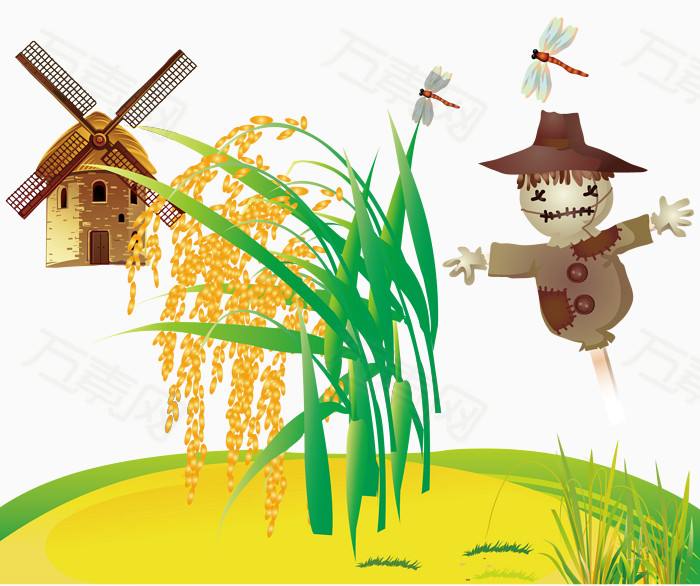 Still today, the people of Malaysia believe the grain holds the spirit of life and creation. With a rather dark origin to such a bright festival filled with rice wine, buffalo races, and agricultural shows, the Kadazan Festival is a beautiful day of giving thanks to the Creator who made the people's most-prized staple of life.

Yams are a common side in a traditional American Thanksgiving, but they're also the most important crop in Ghana. Homowo is an African festival dedicated to the hopefulness that the crops will be plentiful for the coming year and no one will experience famine. Celebrated in August or September, the Festival of the Yams is centered around the new yam harvest. Families are brought together, thrilled and hopeful to be the group with the largest crop.

Everyone in the village comes together and shares their bounty, and yams are the prized dish out of all the harvested vegetables! During this harvest festival, the villages rejoice by dancing and singing with animal masks, acknowledging the end of the rainy season and desiring a fruitful harvest to last well into the new year.

A time for giving thanks to nature, Pongal, the Indian Harvest festival, is a four-day long celebration held in mid-January in Southern India. That is probably one of the most illustrious harvest festivals in the world. Each day brings its own traditional customs dedicated to specific gods. On the first day, Bhogi Pongal, families come together to give harvest offerings to Indra, the god of the rain and the clouds. 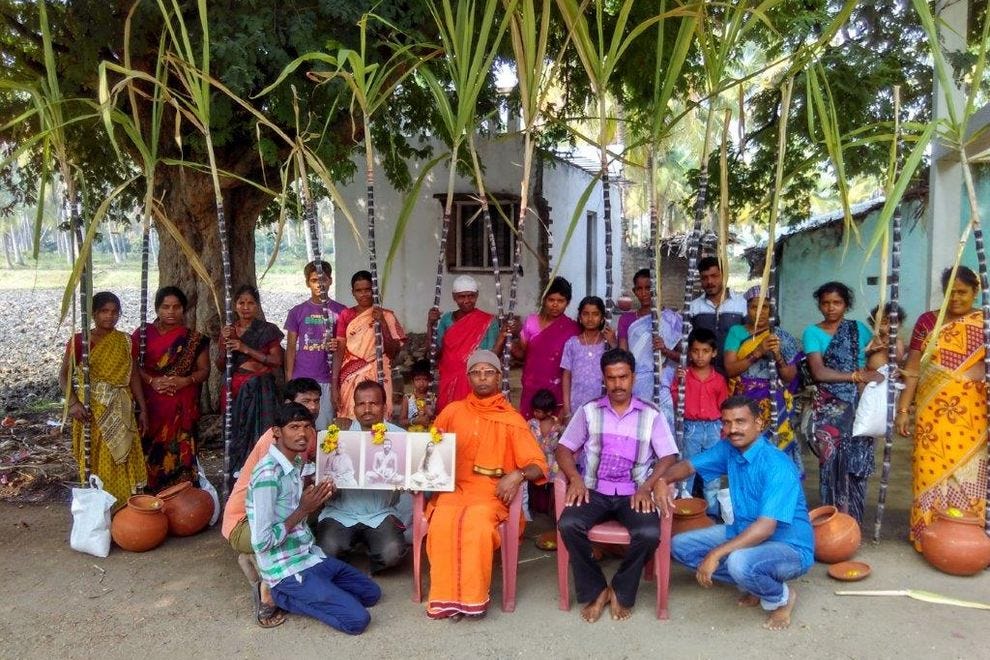 On the next day, Surya Pongal, families honor the sun god by making a sugarcane dish called sakkarai pongal. Mattu Pongal is the third day where shepherds give thanks to their cows by painting them. The final day, Kanu Pongal, is when families travel to see their extended family and share food to give thanks for a good harvest.

Like Grenada, Thanksgiving in the Netherlands has strong ties to America, but is celebrated differently. The holiday is held in Leiden and celebrates the Dutch who helped settle the American colonies (around 40% of adults on the Mayfloweractually came from the Netherlands) during the first ever Thanksgiving around 1621. 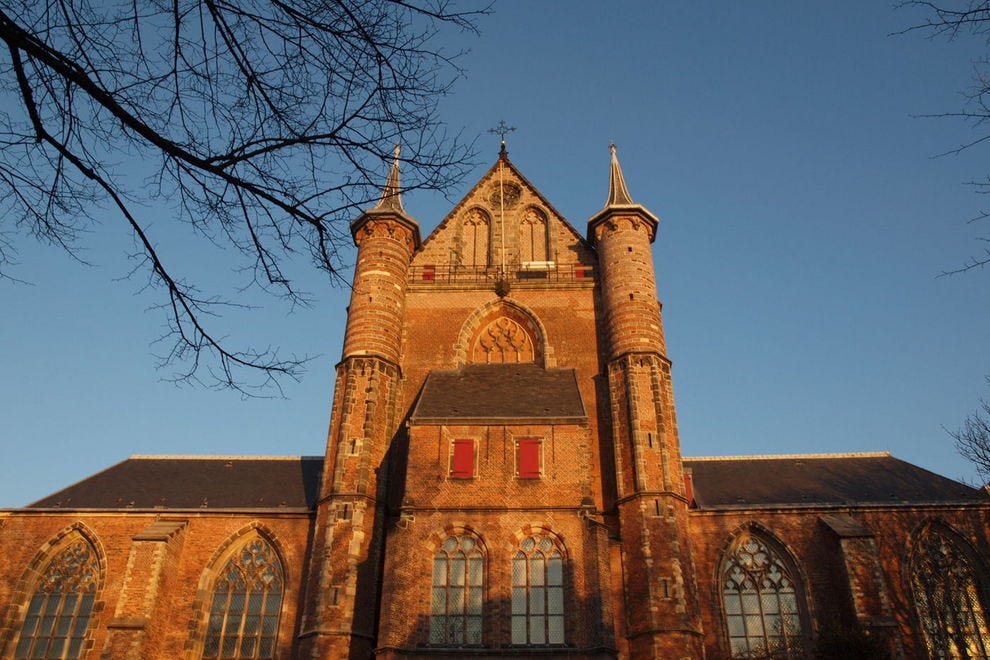 Like in America, the Netherlands observes Thanksgiving on the 4th Thursday of November, but instead of a meal, the Dutch attend a non-denominational church service at Pieterskerk, and enjoy coffee and cookies afterward.

National Thanksgiving Day, celebrated on the first Thursday of November in Liberia, also has an American connection. The country was founded in the 19th century by freed American slaves who imported the tradition. Though only a small percentage of the population identifies as Americo-Liberian today, the holiday persists – though with tropical African flavor. In place of turkey and mashed potatoes are roast chicken and mashed cassava. It's always harvest season in the tropics, so in this case, Thanksgiving is viewed as a time celebrate the founding of the country.

Harvest festivals around the world are bounteous in giving thanks for the natural gifts given by nature and the gods. They bring people together, give cultures reason to celebrate, and provide a time for all people to reflect back on the wonderful disposition of their culture's prosperity for the year.

Thanksgiving, a warm holiday which can bring people closer. No matter where we are, always give thanks with a grateful heart, just say thanks boldly to everyone who had ever helped you on Thanksgiving day. Let each of us give thanks & love, and the world will be a wonderful world.

Vpayfast wish all of you a very happy and blessed Thanksgiving.

So, guys, how do you spend Thanksgiving? Share us about it!

Next : 11 Years of Double 11, Vpayfast Take You An Amazing Shopping Experience!